skip to main | skip to sidebar

How a SEPTA bus took Paul Moore from Frankford to Dublin.

In many ways, Paul Moore is an ordinary man. He lives in the suburbs now, with his wife and 4 kids. He works every day and spends a lot of his free time driving his kids to activities that are far different from his own boyhood activities on Scattergood Street in Frankford. He is devoted to his wife and to his Irish heritage. He worries equally about the Eagles and his kids’ college tuition.

Many of you will recognize his name, as well as his voice. He was the lead singer for Blackthorn, the most popular Irish band in the Delaware Valley for many years. The Philly Music Awards twice voted Blackthorn as the Best Irish Band and Paul was there to collect the trophies in 2003 and 2004. Many of you have sung along with Paul to, “We’re on the way to Anglesea”, which is about the annual “Irish Weekend” in North Wildwood.

This story is not about Paul’s music or his days with Blackthorn, although it does help to explain how he realized his great success. The most outstanding thing about Paul is that, while gifted, he is a humble and honorable man.

He hangs on fiercely to his identity as a perfectly happy Irish Catholic kid from Frankford. His boyhood is probably not very different from lots of other kids that were born in the ‘60’s and stayed in the neighborhood.
Being a Frankford Irish Catholic kid meant that you went to North Catholic High School and that you knew the words to lots of Irish songs, and a little Irish history. Probably, your grandparents or great grandparents emigrated here and raised you with an Irish flavor and the knowledge that while America was the place to be.“ Be sure to never forget your roots” was a phrase that you heard and heard again around the house. Paul recalls the ever-present music of the Clancy Brothers and The Irish Rovers and that it played a little louder on the holidays. He smiles at the memory of his grandfathers favorite toast “Here’s to the Irish and we’re not much, but a whole lot better than the g-d Dutch”. It was the time when families had two parents and one car and you grew up with the fervent belief that you would one day take Larry Bowa’s spot in the infield.

Many parents had dropped out, or gotten as far as high school, but not many had completed college. So when High School graduation came, college was on the list of possibilities, but who knew how to go about it?
18-year-old boys from Frankford were presented with these choices in 1982. A job, the military, a life of crime or college. By then, the idea that each family had to produce at least one for the clergy was dying out. College may have been the most abstract because in Paul’s family no one had ever been there. A job or the military were the most obvious, and parents steered in this direction because it was what they knew.
After making a very weak try at a life of crime, Paul found it not too his liking and about equal with the idea of joining the work force or the Air Force. So, college won, with a plan to one day be a history teacher. Paul frequently says that he “could have gone anywhere, but he could only afford Temple” and so Temple it was.

I think that it is fair to say that the odds were against Paul completing college. His family simply didn’t have the money and working your way through college is a tough nut at any time. But then, he had the bus incident.

The night began with a story that is best not told here, other than to say that it included those two things that are beloved by college-aged males everywhere. Drinkin’ and scrappin’. Just know that Paul and his friends were on turf that they had rendered unfriendly. Lacking a proper getaway car, they headed for the Woodland Street bus, which would take them to the El, and on to the sanctity of Frankford. Paul was the last to board and these are his words.

“I had my right leg in the door on the first step. The rest of me was outside and as I fished in my pocket for change I waited for the others to drop their fare into the box. That’s when he suddenly closed the door and began to drive. I discovered you could hop 4 times on one leg as a bus accelerates before you flip, flop and fracture. I guess he drug me about 15 feet before someone’s screams alerted him to a problem. They told me later that the screams were mine”

Paul’s education came to a temporary stop at the moment the bus did. Several months of rehab would follow. It was another chance to quit, but he chose to fight instead, so he got a lawyer. The lawyer went to SEPTA with a suit and was told to get in line. So they did. It took 6 months for SEPTA to make the “get it over with quick” offer of 10,000 bucks, which Paul accepted. It was a lot of money to a kid who was scratching it out by painting and collecting garbage and washing dishes. Even if 1/3 went to the lawyer it was a lot of money to a kid from Frankford. By the time the money came through, Paul’s leg had healed.
Having a lump of money like that would have been an investment in trouble for some. Paul chose to use it for tuition, and that plan eventually helped him to earn a year studying in Dublin, Ireland at Trinity College, through a special program offered by Temple.

This writer has stood in awe in the Library of Trinity College that they call The Long Room, drinking in the fact that this was the place that formed the minds of Yeats, Wilde and Shaw. Paul Moore spent a year of his education at that most hallowed spot. Thomas Kinsella would teach and inspire him. Paul would also roam around the castles and the pubs and the ancient ruins.
Here was an Irish kid from Frankford standing at the very Rock of Cashel, in the shadows of Brian Boru and sitting in the shadows of the pubs of Dublin and listening, in the way that musicians listen, to the WolfeTones and The Furey Brothers.

Life often does it’s best to drag us down. Sometimes even going so far as to drag us from a moving bus. Eventually though, the bus stops. If you are able to get up you have to get on with your life, one way or another.
Paul Moore came home from Ireland and completed his degree. He married the girl that he dared to hope would be waiting. He took a chance and left the old neighborhood and planted his new family all the way over in Port Richmond.
He remembered his time at Temple, and all that he had seen and all that he had heard in Ireland.
It wasn’t long before he decided to take the music that he learned around his parents’ kitchen table and combine it with the music he had learned in Ireland and bring it to life in a band that he decided to call Blackthorn. Perhaps you have heard of it. If you are Irish and from anywhere in the Delaware Valley, I’ll bet you have.

As 2004 was coming to a close, Paul decided to leave Blackthorn, the band that he had founded and fronted, to spend time with his family. Time will decide what he does musically in the future. His many, many fans hope to hear from him again one day.

Whatever Paul decides, he will remain a proud son of Frankford, who took a bad break and made the very best of it. 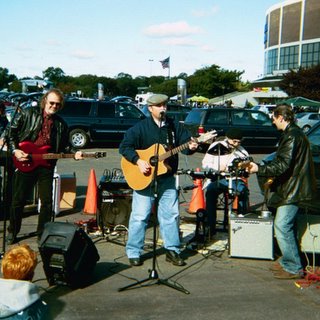 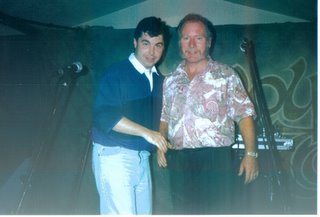 Paul performing his recently written
song "Another Year Till Sunday" for
CBS TV outside of the Eagles Stadium,
with Pat, David and dennis of
The O'Sullivan Brothers.


Paul, with Noel Nagle of The WolfeTones

Paddyswell is a talented group of likeable musicians. I say that, even though Joe Hughes makes fun of my new drums.
You can read all about it at www.paddyswell.com